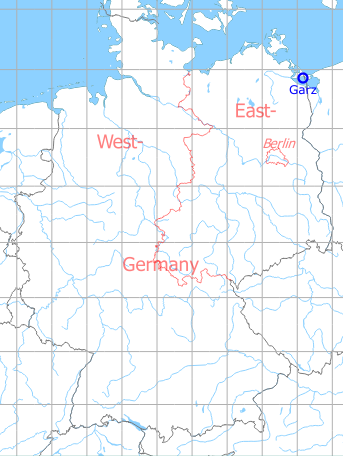 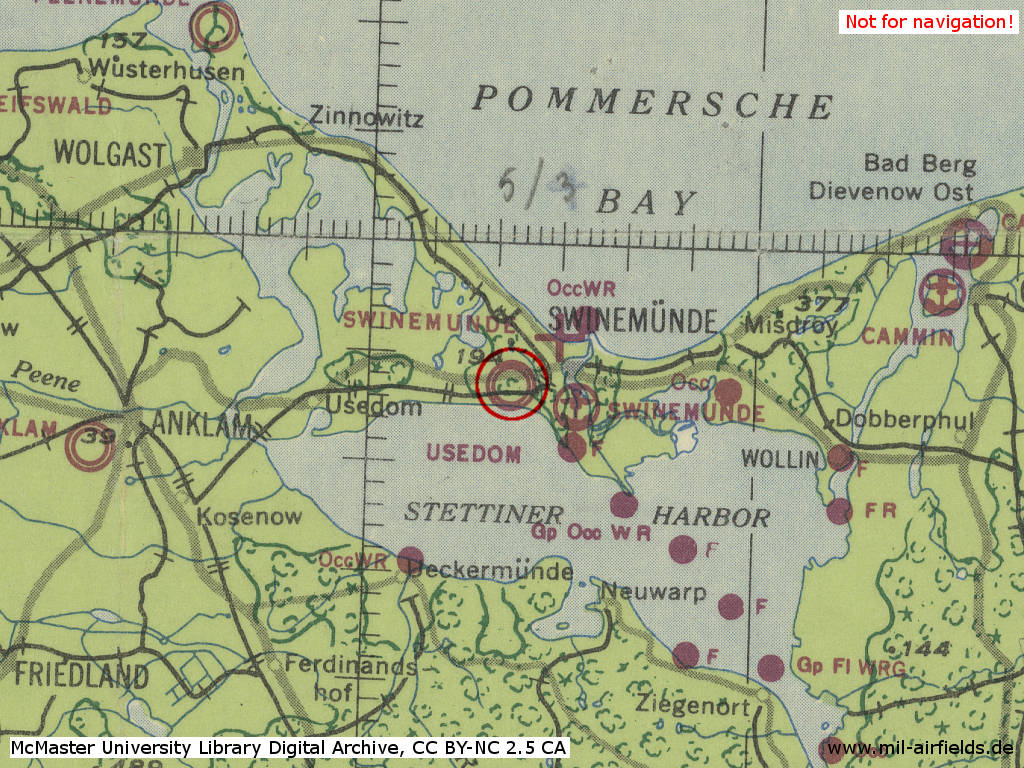 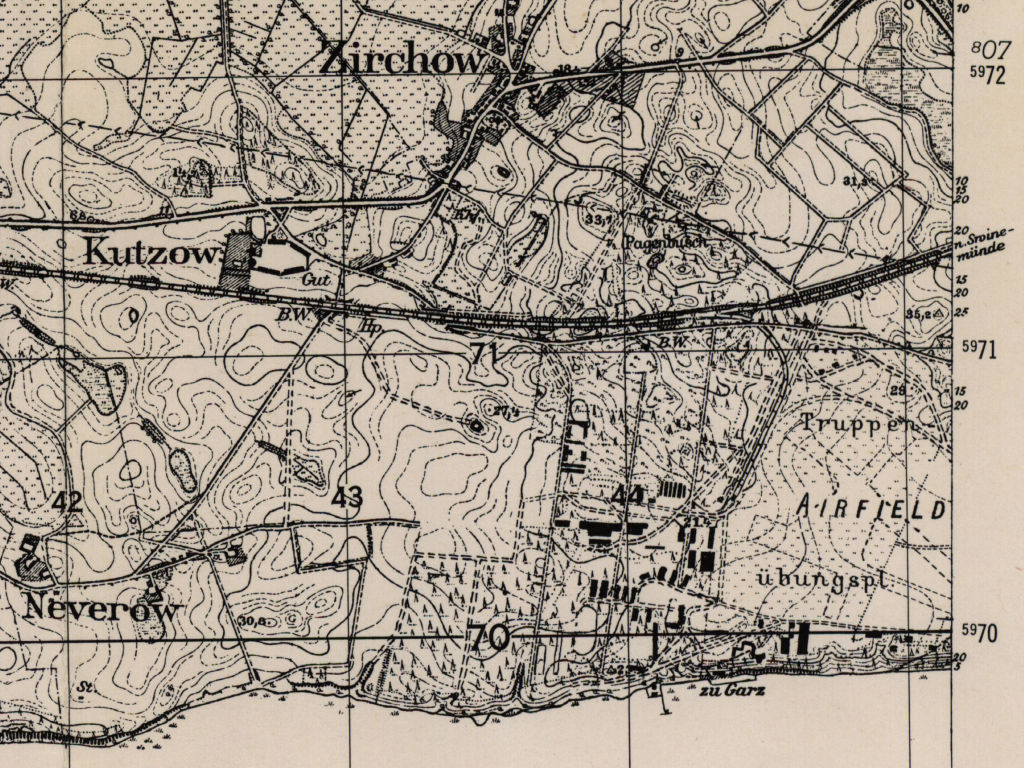 Garz airfield on a US map from 195x - Recognizable are the old runway system, the buildings of the former air base as well as the connecting railway. In the south is the Stettiner Haff (Szczecin Lagoon).
Source: AMS M841 GSGS 4414, Courtesy Harold B. Lee Library, Brigham Young University

Airfield of the East German Air Force. It was used for the temporary deployment of wings with construction measures at the home airfields. It was also used by the East German Interflug airlines as "Heringsdorf".

The Garz airfield (N 54/L 20) airfield is located between Garz and the "Haff" and borders a ridge on the north which limits the view of the field. ... could not go near the airfield since it was heavily guarded by Soviet Air Force patrols.
16.08.1949: Four northbound fighters took off in formation about 4 p.m. with fair visibility. The aircraft landed again forty minutes later. There was no flying until the evening. Description of the fighters: Radial engine, retractable landing gear, elliptical wings and rounded off wing tips, elevator assembly of the same shape.
18.08.1949: A U-2 biplane took off at 10 a.m. heading east. Four fighters of the above type took off at 11 a.m. and did acrobatics in the vicinity of the airfield, above the cumulus clouds. A biplane landed at 12:10 p.m. A westbound biplane took off at 7 p.m. There was no other flying. Heavy antiaircraft gun firing was heard from the direction of Usedom (N 54/L 00) for ten minutes about 11 a.m.
16. und 18.08.1949 Motor vehicles which were occupied by Soviet Navy soldies were observered on the Ahlbeck - Garz road.
Comment
a. ... on the same day observed fighters practicing at the Garz airfield. ... the unit stationed at the airfield is not known.
b: It is reported that the fighter unit concerned is assigned to the Soviet Navy Air Force, Baltic Sea Fleet.
Source: /CIA RDP82-00457R003500540004-4/

a. Garz airfield lies 2 1/2 km woutheast of Zirchow and 2 km southwest of Garz village. Its northern boundary, 400 meters from the field proper, is the dismantled Swinemuende-Usedom-Berlin railroad line; woods mark its southern limits. There are guards at the hangars and throughout the area, and frequent controls are made in the Garz-Zirchow area.
b. The well-kept grass field contains a northwest-southeast runway, 25 meters wide and 2 km long. Concrete hangar aprons occupy the northwestern edge of the field.
c. On observation date, two Boston-Douglas planes were parked in front of a closed hangar. Airfield workers claim that the hangar contains twelve seldom-used YAK type planes and that training missions are flown only once every 4-6 weeks. The unit gets its supplies from Swinemünde. Sirens sounded frequently during the nights of 12 and 13 August, but there was no air activity.
d. The field, suitable for all aircraft types, has an DF(?) station and boundary lights. The fuel dump consists of several buried railroad tank cars. Buildings are intact, some in process of being overhauled.
Comment The sole available airfield guide states that the runway at Garz is 3,000-4,500 feet long.
Source: /CIA RDP82-00457R003300440012-1/

1. The Garz (N 54/L 20) airfield, located between the "Haff" and a ridge, has an about 2,500-foot runway running parallel to the shore. Three hangars and two stone buildings, as far as could be seen, were available at the field.
2. Intensive flying, mostly local flying, was done between 6 and 11 a.m. on 16 August 1949. Besides a biplane and a speedy fighter, most of the aircraft observerd were two-seater monoplanes, low-wings with rounded off wing tips and in-line engine.
3. During two hours of observation ten outbound and five inbound motor vehicles ... were observed at the airfield entrance ... The airfield was occupied by Soviet Air Force and Navy units.
Comment The Garz airfield was not previously known to be occupied. Previous reports gave reason to believe that the airfield is assigned to the Soviet Naval Air Force, Baltic Sea Fleet. According to this report, it must be assumed that either a training unit for fighter pilots or a ground attack unit is stationed at the Garz airfield.
Source: /CIA RDP82-00457R003400380008-9/ 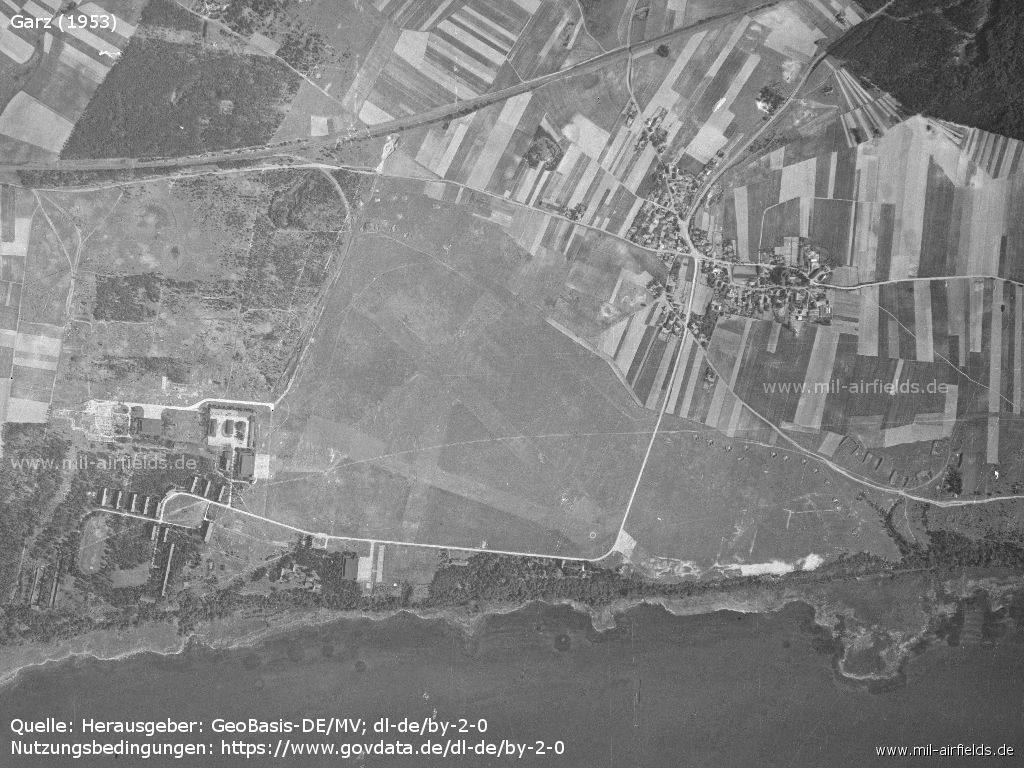 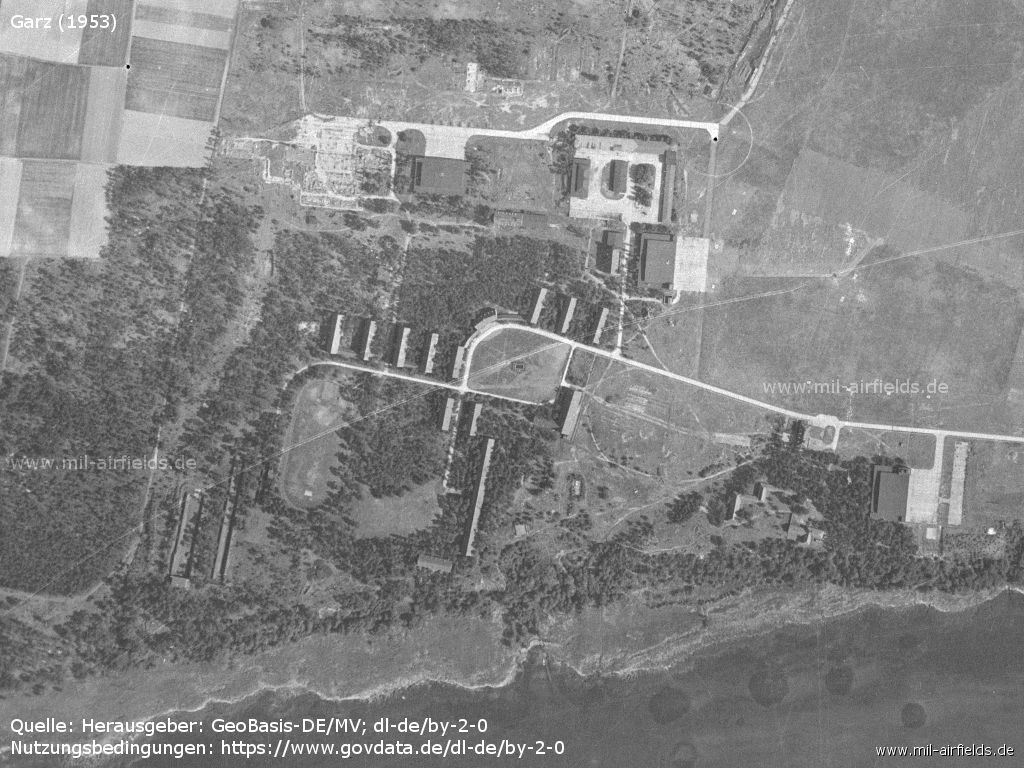 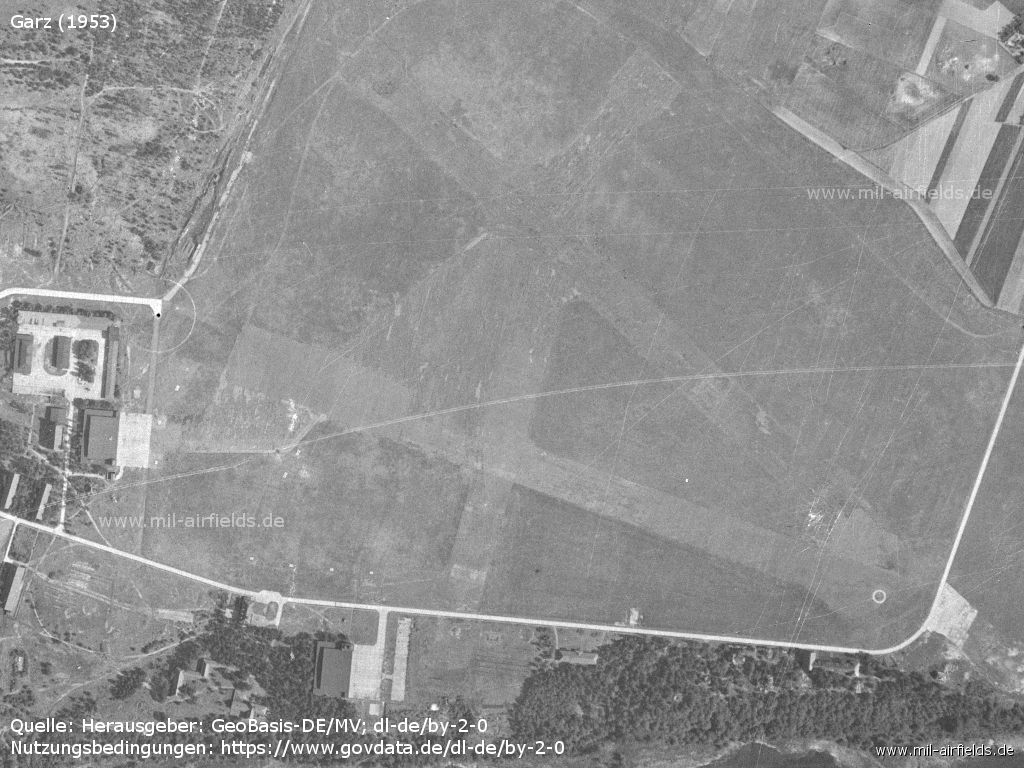 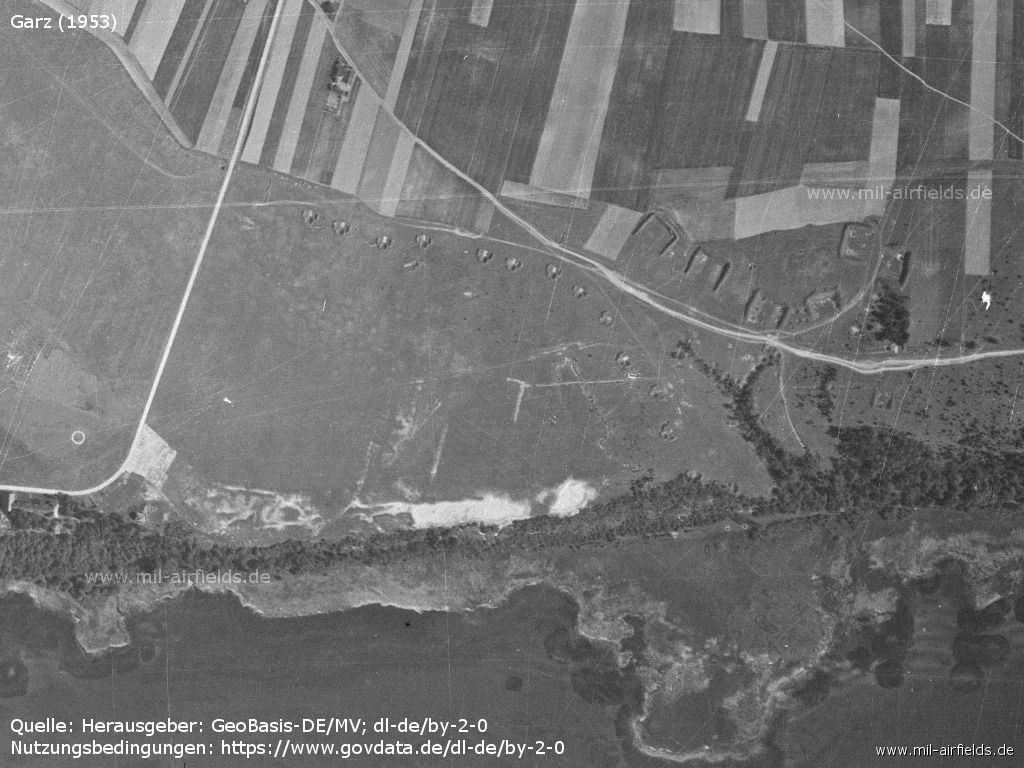 Large and small aircraft revetments in the east of the field 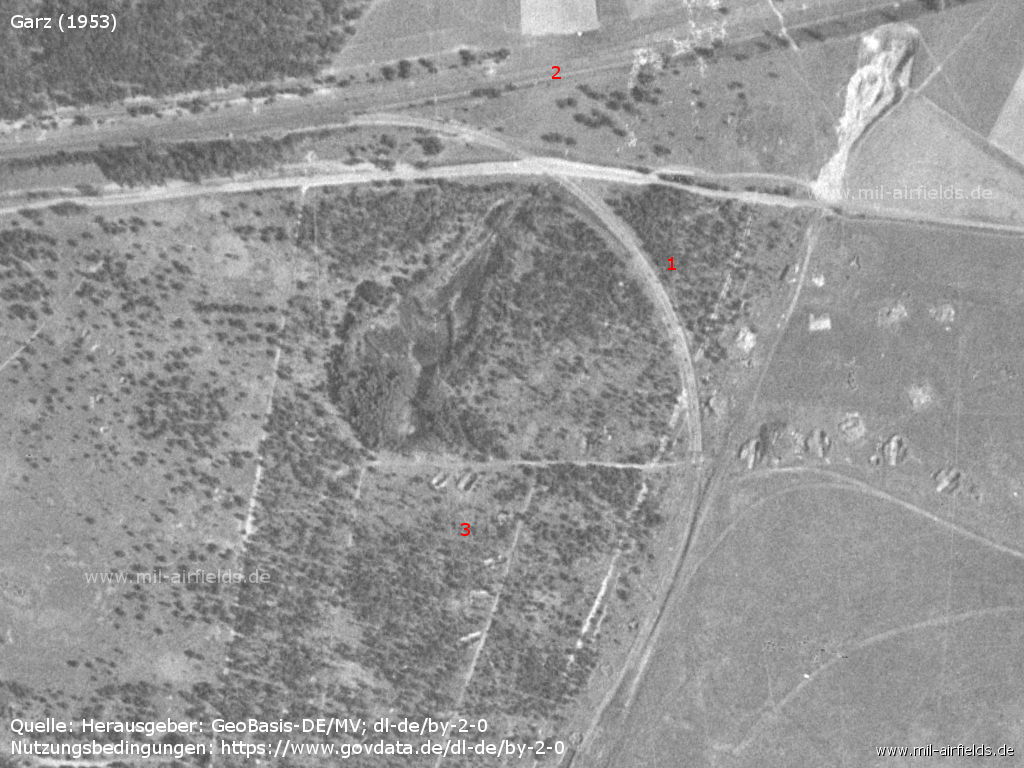 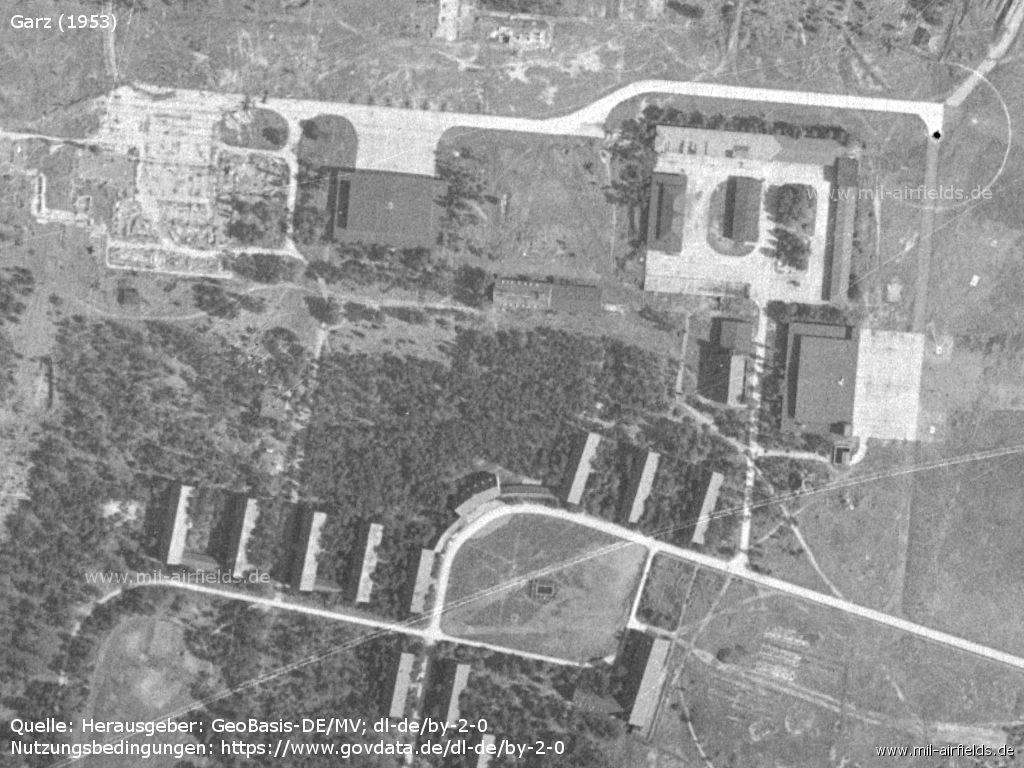 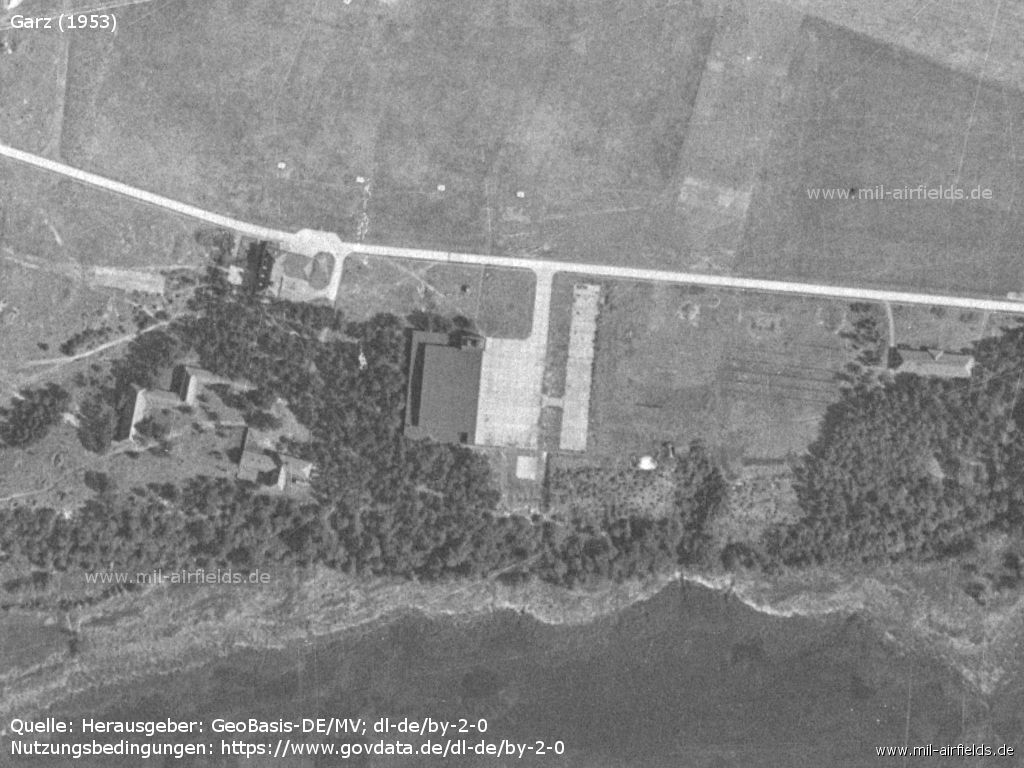 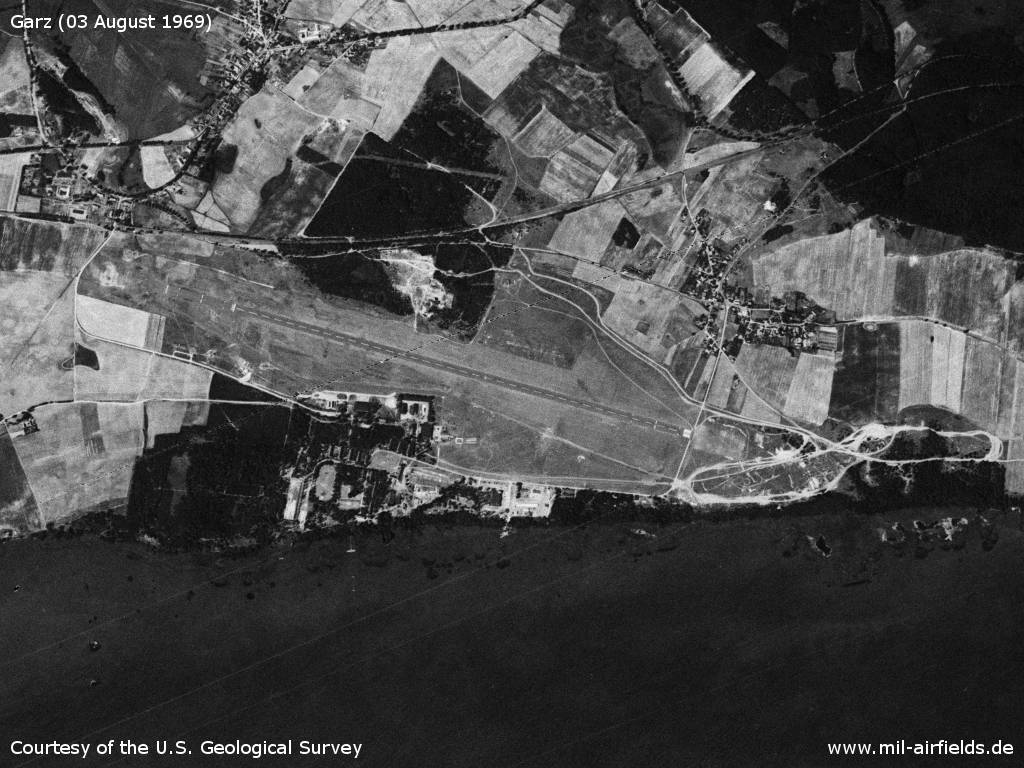 Garz Airfield on a US satellite image from 03 August 1969 - The airfield is located directly at the Oderhaff.
Source: U.S. Geological Survey 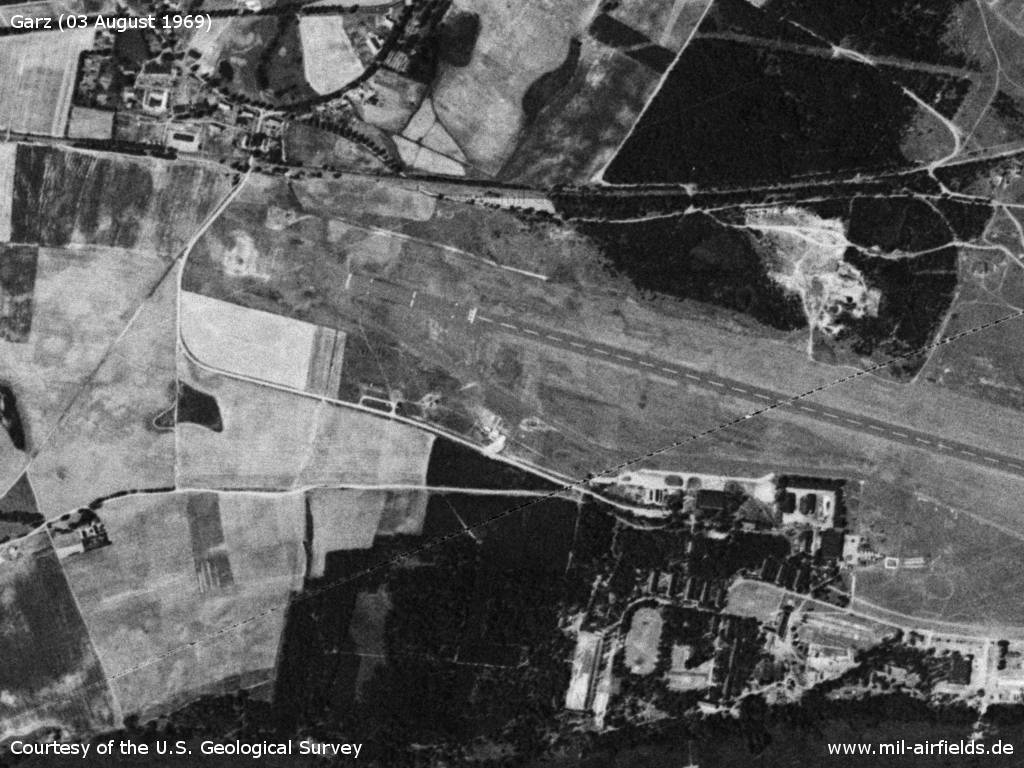 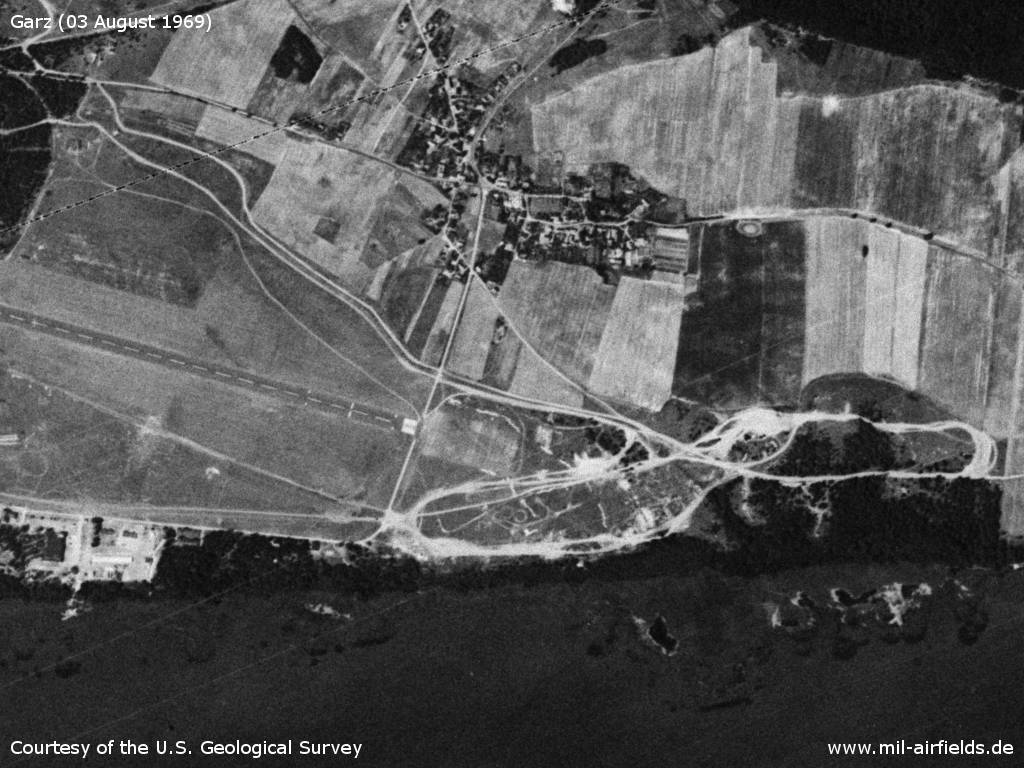 Eastern part - There is a military training area east of the airfield.
Source: U.S. Geological Survey 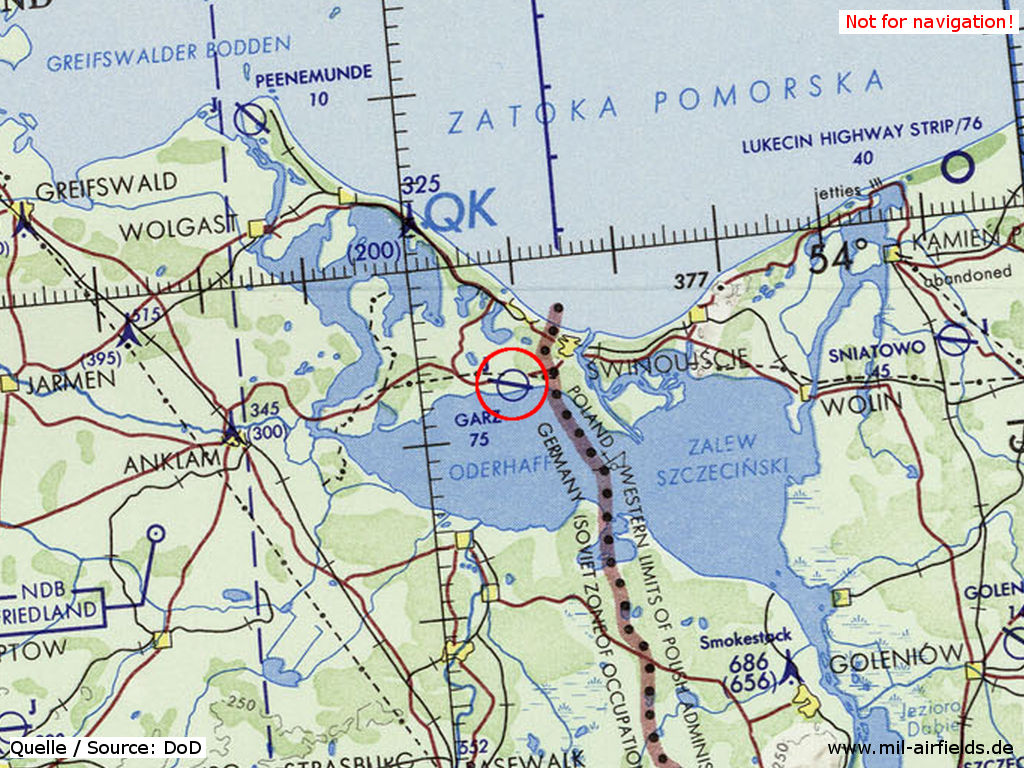 Garz Airfield on a map of the US Department of Defense from 1972
Source: ONC E-2 (1972), Perry-Castañeda Library Map Collection, University of Texas at Austin 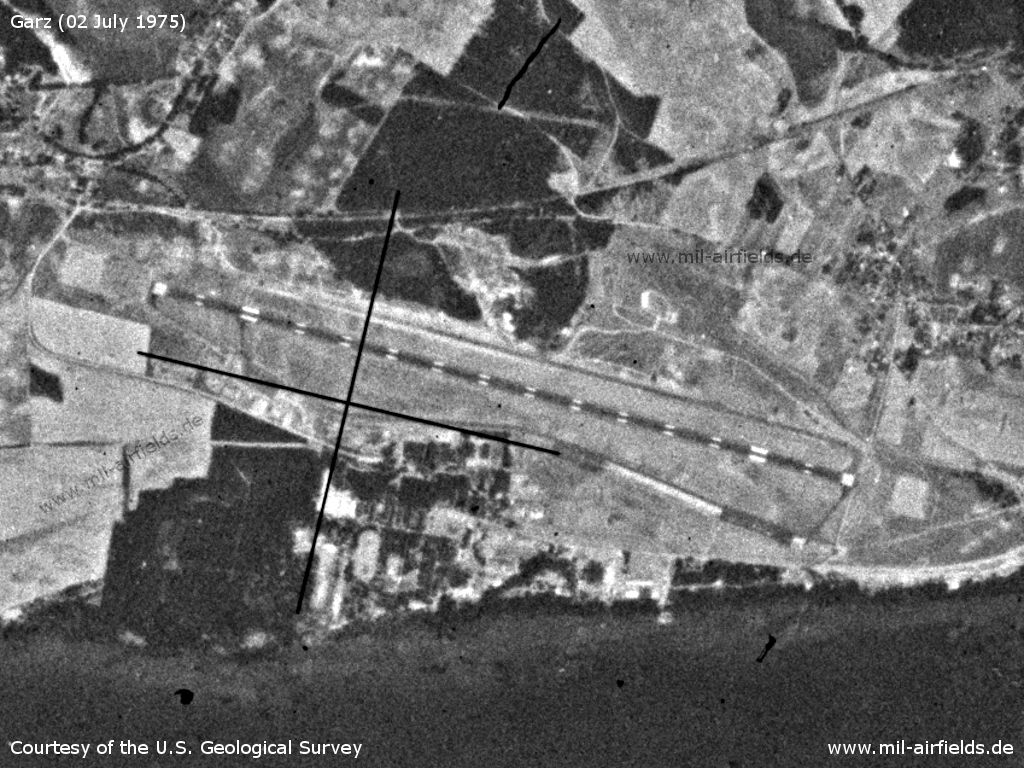 Garz Airfield on a US satellite image from 02 July 1975 - In comparison with the 1969 picture, the northern taxiway has been added. In addition, the runway now has a different marking.
Source: U.S. Geological Survey 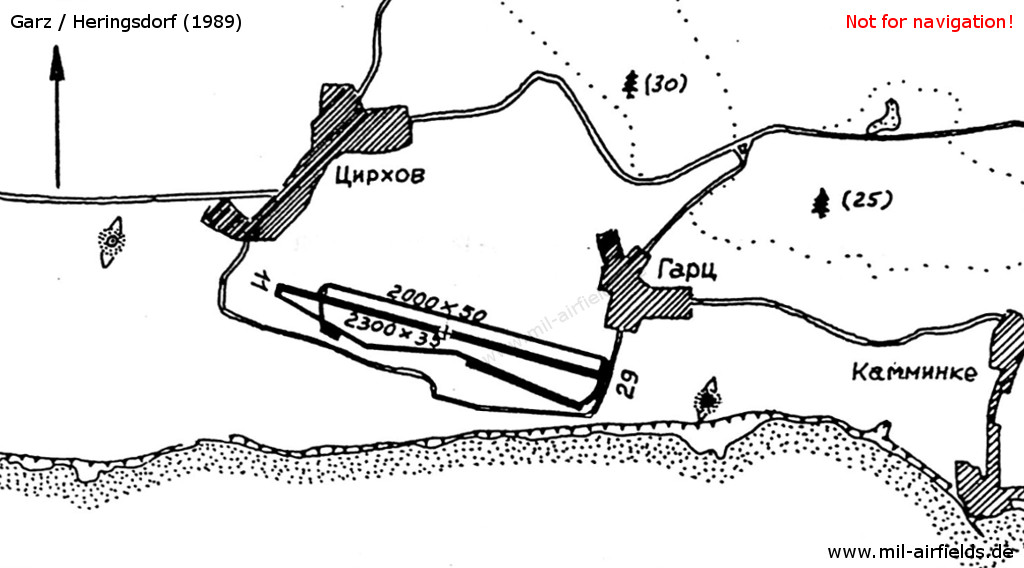 Garz airfield on a map in the East German "Directory 012" (Verzeichnis 012, formerly "Top Secret") from about 1989/1990. - Hand-drawn maps were not unusual in the Eastern bloc. The location with the villages Zirchow, Garz and Kamminke can be seen. East of Kamminke is the border to poland (not shown here). The airfield has a hard-surfaced runway of 2.300 m length. The taxiway in the north is also available with 2000 m as a runway. To the northwest and south-east, the locator beacons are marked with dot-filled circles and with ellipses for the middle markers.

Runway and taxi tracks for take-off (dashed lines) and after landing (solid lines) - still from Directory 012 - In the Warsaw Pact, taxiways had numbers. 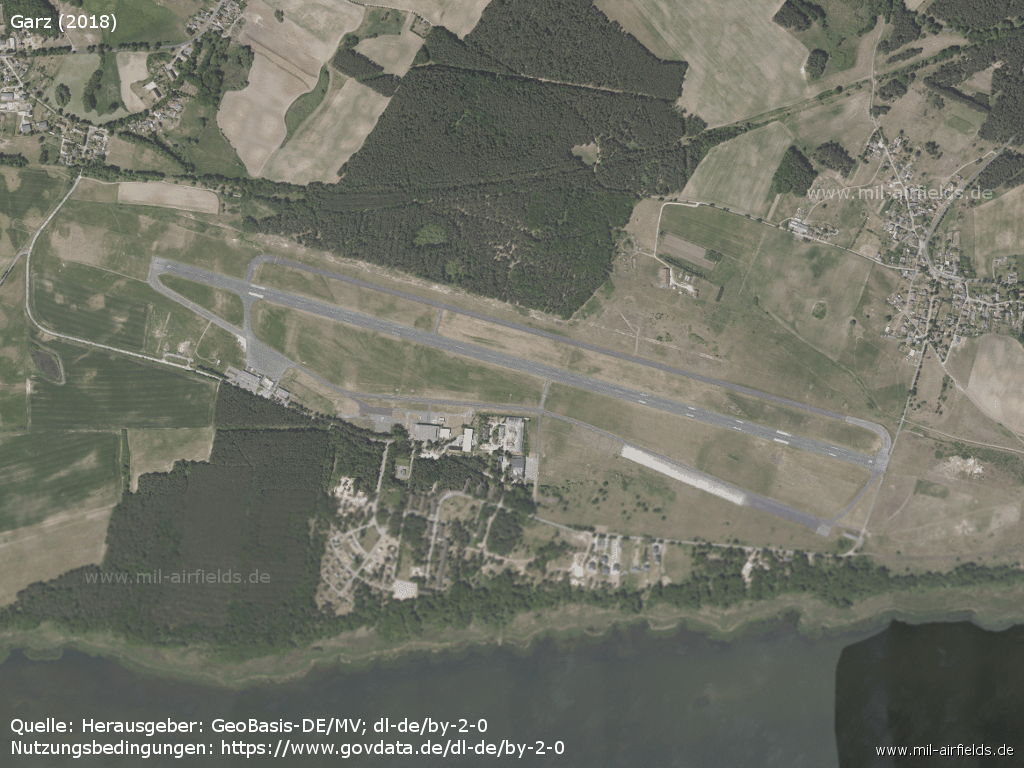 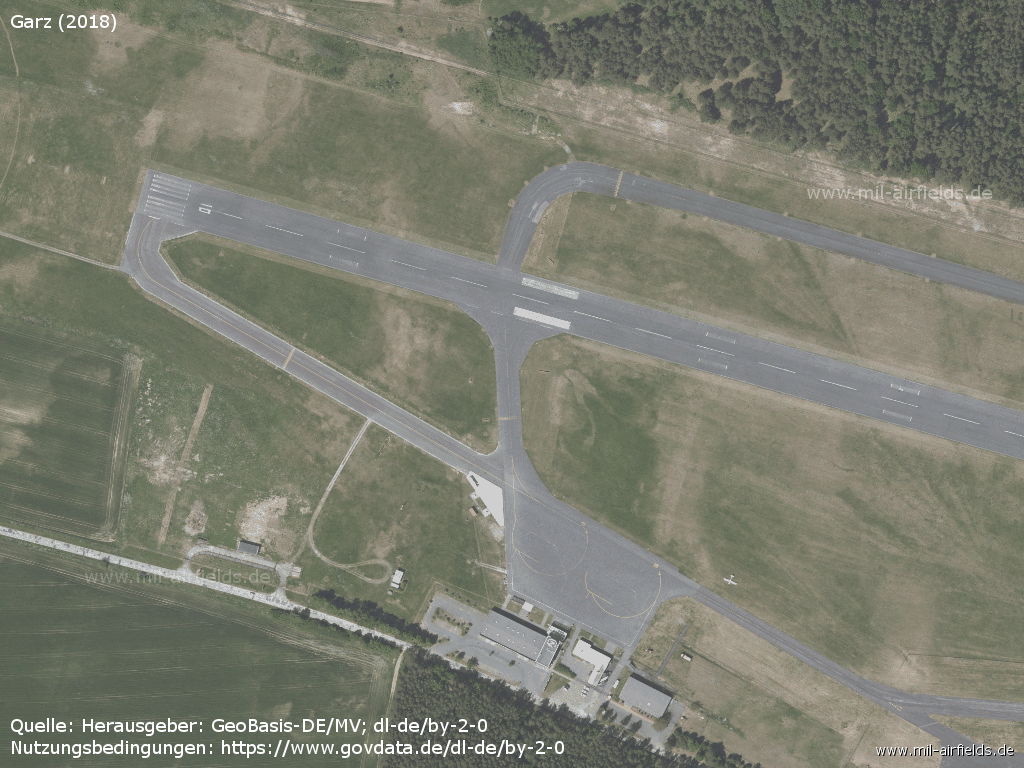 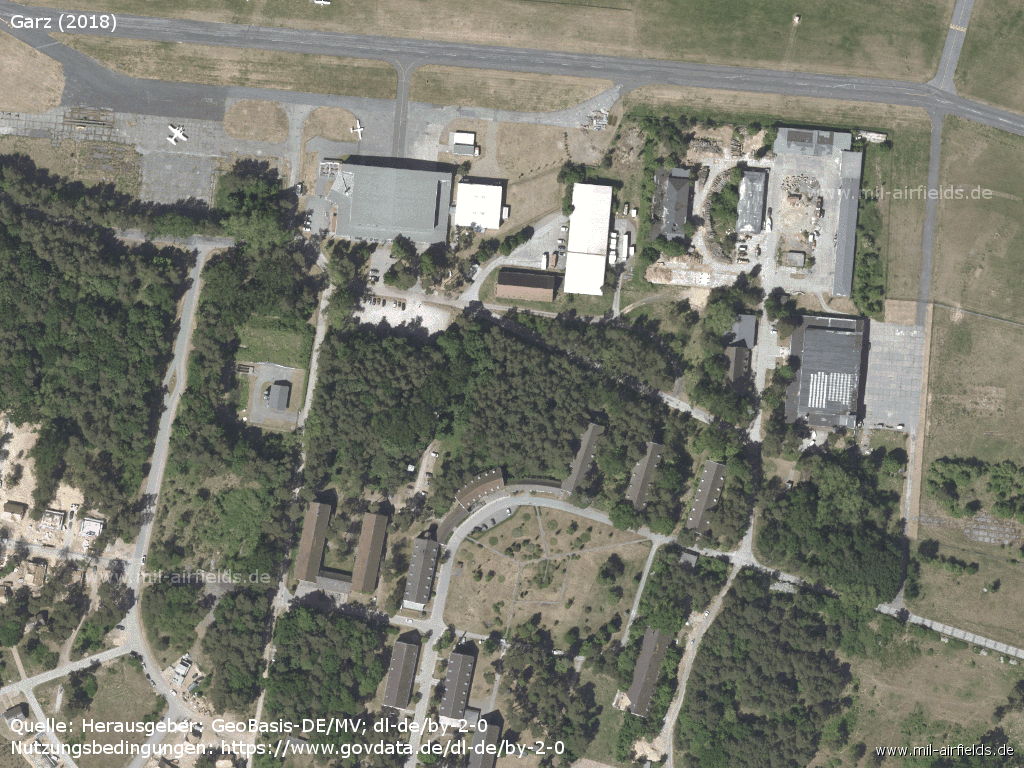 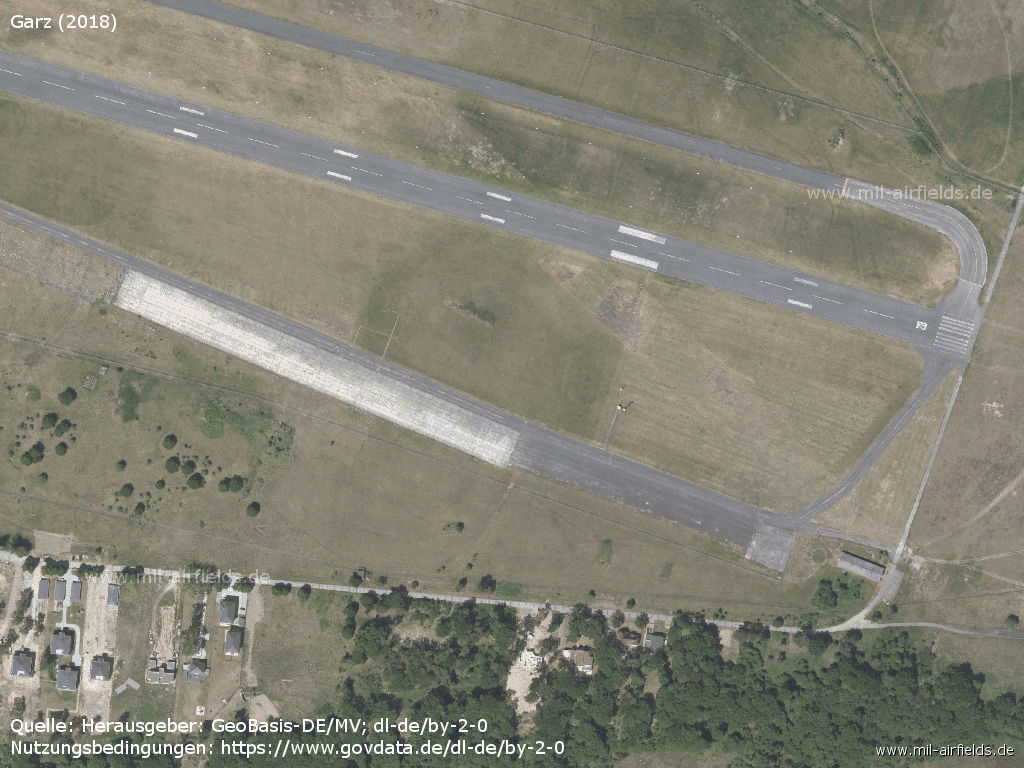 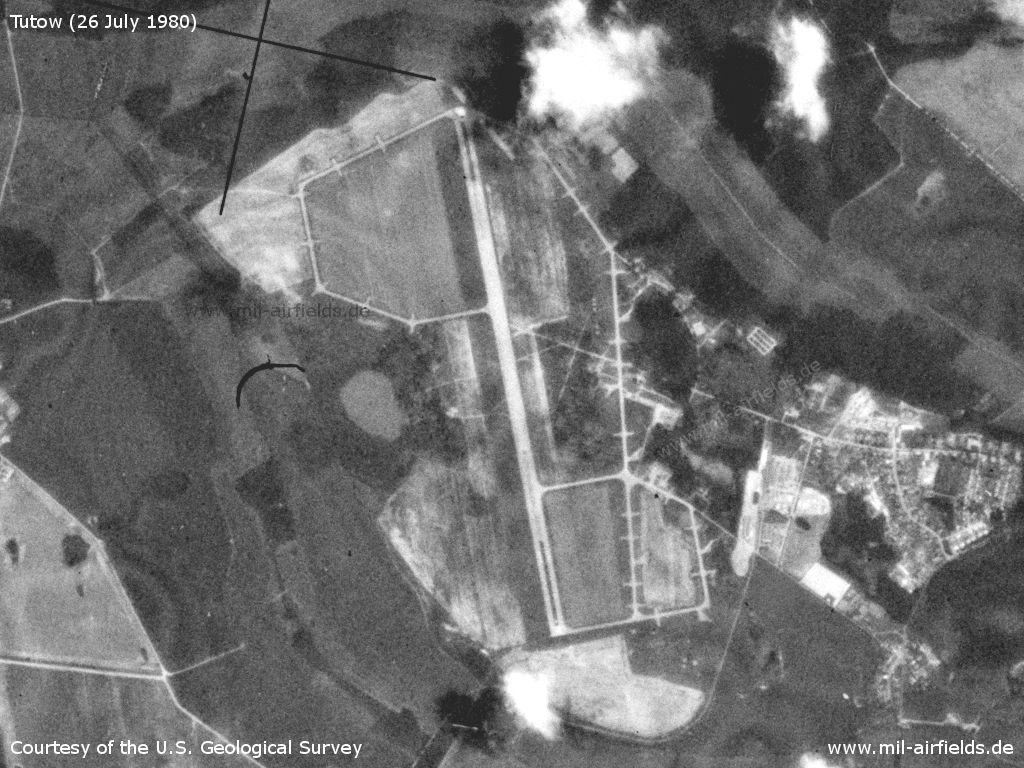 Jēkabpils Air Base (Latvia)
800 km away 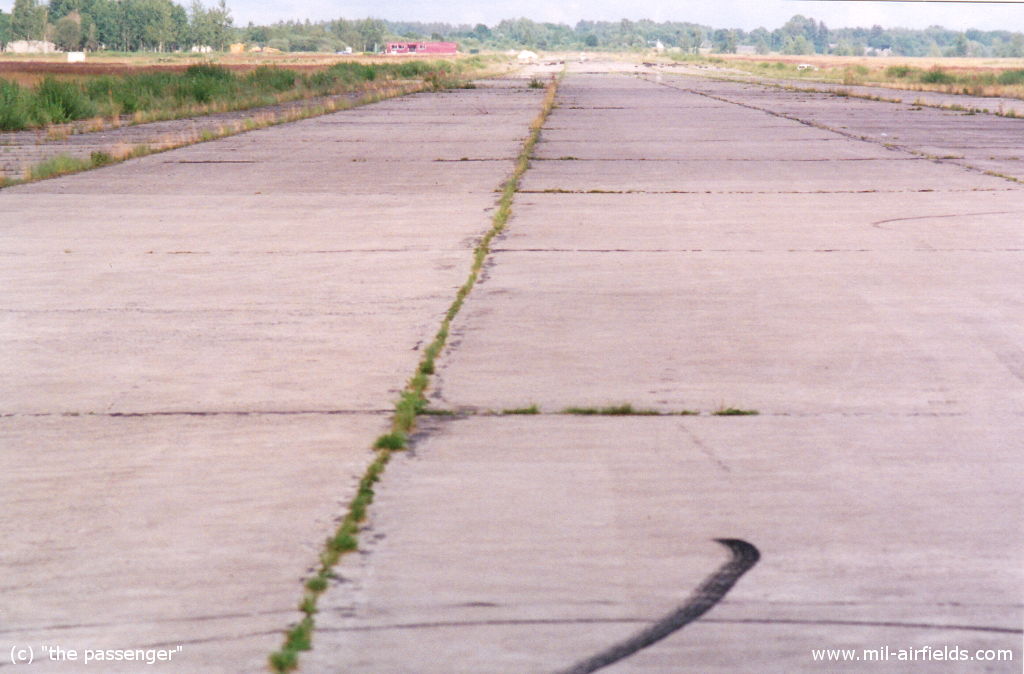 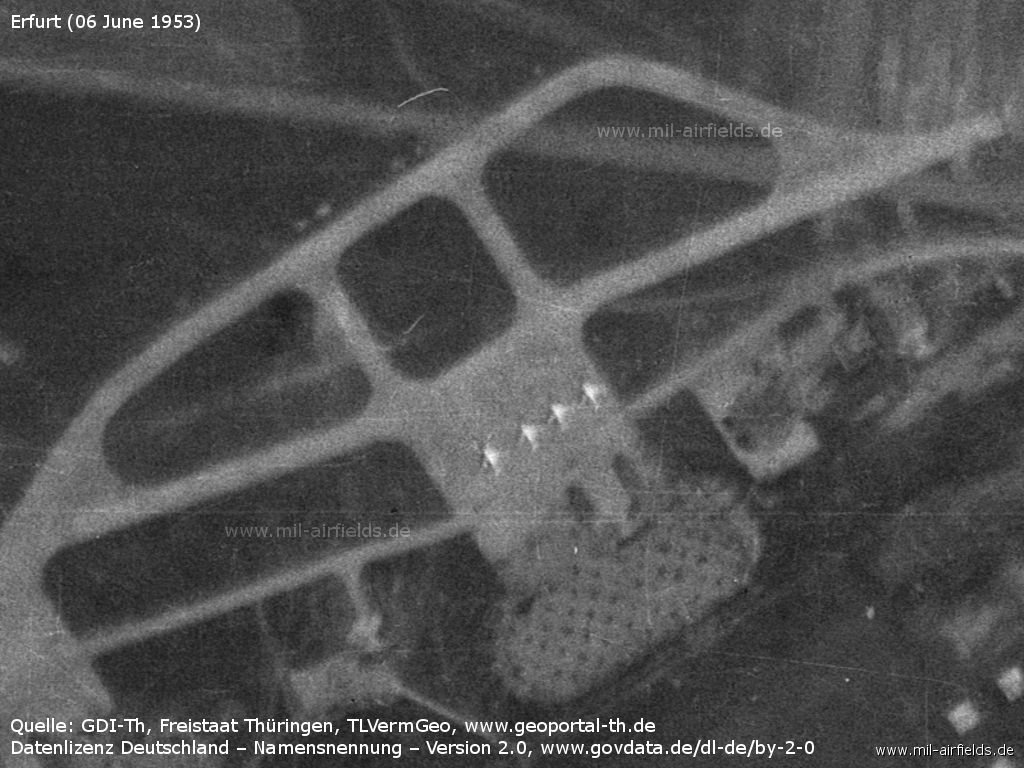